We’ve transferred our dog blog to http://www.roverrecommended.com/dog-blog
Please drop by and check it out! Woof!

We’ve had a rainy weekend but this cute dog hasn’t let the damp weather spoil his fun! 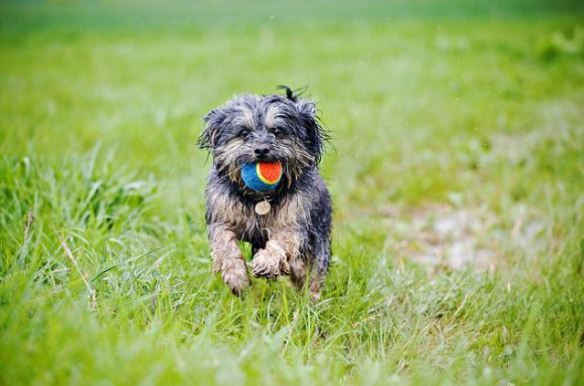 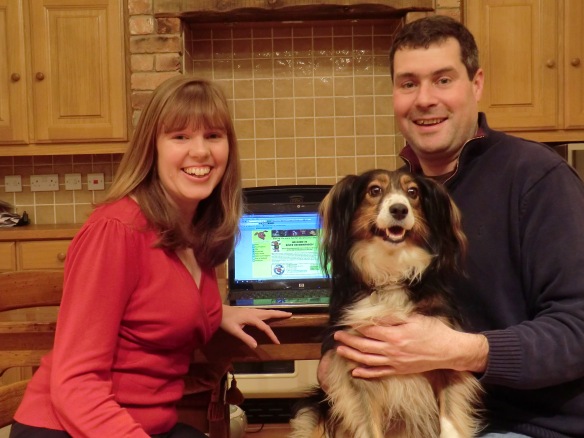 We’ve been contacted by a researcher for a TV production company asking for more information about one of our videos on You Tube. The questions she asked made me think back to when we first adopted Holly and reflect on how much she means to us so I thought I’d share them with you. Don’t worry if Holly becomes famous though – she won’t let it go to her head and will still keep in touch with her fans…

Name of dog, you and other person in video.

Holly the dog and her owners Louise Dolan and Simon Howgill. You can also hear the voice of our dog walker Sally in the video. Holly stayed with Sally whilst we were away and Sally jokingly says that she’s sorry but we can’t have her back as she enjoyed looking after her so much!

What is the dog’s breed? What are some of the common characteristics of this breed?

Holly is a Border Collie crossbreed dog. She is very smart and loves dog agility which comes from the Collie in her. Unusually for a Collie she is not normally interested in chasing balls or other animals so Holly lives happily with our cat. I think Holly must also have some Spaniel in her family tree as she walks with her nose a few millimetres from the ground and stops without warning so she doesn’t miss a good sniff!

When, why and how did you first acquire the dog?

Holly was sent over to England on a ferry from Ireland with a shipment of dogs who had been saved from destruction in Irish Council pounds. There is a big problem with stray dogs in Ireland and very few rescue centres so many dogs are put to sleep every year. Holly was very lucky to get a second chance and was taken from the ferry to a rehoming centre in Rugeley, England called the Border Collie Trust. We had lost our last dog very unexpectedly due to sudden illness and were heartbroken and couldn’t face the Christmas holidays without a dog. So we went to the Border Collie Trust who were still open for rehoming dogs and found a dog who we named Holly for Christmas.

How would you describe the dog’s personality?

Holly was the most nervous rescue dog I have ever seen. She hid under a chair when we were adopting her at the rescue centre and wouldn’t come out even for some home cooked chicken. She got on well with our cat straight away and has always loved travelling in the car but was incredibly scared of people, especially men and children. It took Holly four weeks to let us even touch her and it was was difficult having to be so patient when all we wanted to do is give her some fuss.

Holly will always be a bit wary of strangers due to her terrible start in life but she is now the most loyal and loving dog I have ever owned. She likes nothing better than to spend time with us.

When did you realize that there was something special about your dog?

The first weekend we had Holly she was so scared she escaped from our garden when a visitor opened the gate and we couldn’t stop her from running away from home. We were devastated and got many family members to help us to search for Holly for hours. Simon’s mum saw Holly running up the middle of a busy road but couldn’t catch her that night. The next day we were eating breakfast before being ready to resume our search and we saw Holly walking up the drive to our house. We opened the front door and she walked in! I think that this was the first moment that she realised that we weren’t trying to hurt her and she might be better off at home with us. Since then she has never run away again and never even lets us out of her sight when she is off lead.

How would you say your relationship is like with your dog?

We have an incredibly strong bond with Holly. We don’t have children so she makes our family complete. She is very sensitive to the emotions of people that she has bonded with. So if we are fed up she will insist that we play with her until we have cheered up and if anyone in the family is ill or upset she will lie quietly next to them and give them a gentle lick. This was a great comfort to my mother when she was very ill.

Take me back to the very first moment when this video happened.

We had just got back from a 12 hour flight from sunny South Africa and were wrapped up against the freezing cold weather in England. We rang Sally to let her know that our plane had landed and drove straight from the airport to Sally’s house to pick up Holly. Sally heard us arrive and opened the front door so Holly came rushing out to greet us.

Why do you think your dog was so excited to see you?

Holly is always really happy to see us whenever we come home as we have such a strong bond.

Does your dog always get excited when you come home or was this particularly special?

It was the longest time we had ever left Holly because we went on safari for 3 weeks to celebrate my 40th birthday. It was particularly special to see her again as although we had a wonderful holiday we really missed her and she really missed us!

We think Holly is such a special dog, and because we don’t like to leave her, we started a website listing dog friendly places to stay and visit so she could come too!
We wanted to give something back to the Border Collie Trust to thank them for rescuing Holly so all money raised goes directly to them. The site is called www.roverrecommended.com and it was featured in the local papers when we launched. Here is a link to the articles.
http://www.roverrecommended.com/articles/article6/Melton_Times_Article_Published_24_1_11.htm
http://www.roverrecommended.com/articles/article7/Nottingham_Evening_Post_Article_Published_22_1_11.htm
So far we have raised over £3700 to help change the lives of other rescue dogs like Holly.

Here are some of Holly’s favourite things from our week in sunny Cornwall.

First we stopped off at Pencarrow garden. There is a lovely formal garden and woodland walk and it’s super dog friendly! Holly particularly enjoyed watching the peacocks and chickens as we sat in the cafe courtyard. It certainly kept her entertained! Here is Holly posing for the camera next to the stream at the start of the gorgeous woodland walk. 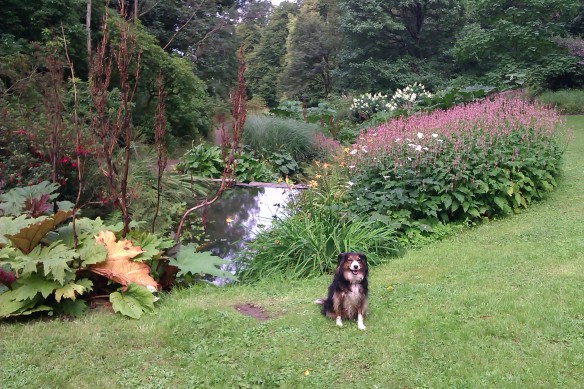 Next was a visit to Trebah Gardens. What a view! 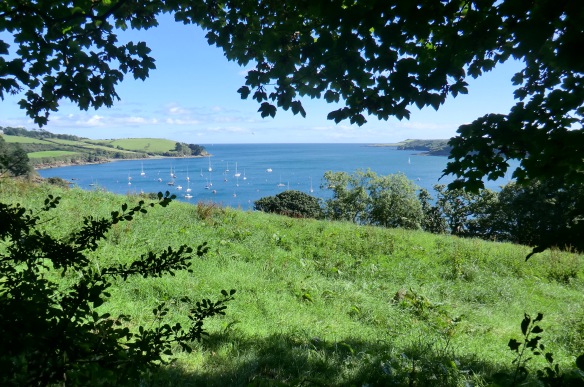 Holly paddled on the dog friendly beach at Trebah but her favourite past time was definitely watching the Koi carp in the pond. They were simply fascinating to a small dog… 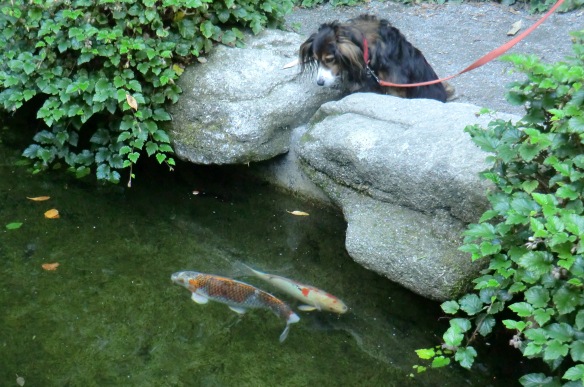 We explored every bit of the garden doing the treasure hunt and when we handed in our quiz sheets to the nice lady at the entrance desk she gave Holly a bag of treats to say well done for helping to sniff out the clues. Then it was off to the best dog friendly cafe in Cornwall for some well earned fish and chips. 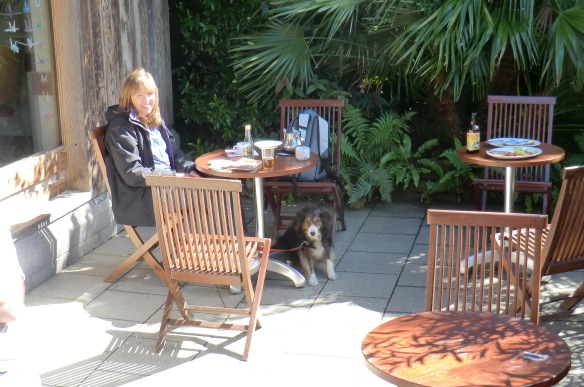 A visit to Gweek Seal Sanctuary was Holly’s final holiday highlight. They do brilliant work rescuing seal pups off the Cornish coast. Holly couldn’t believe her luck seeing penguins and otters on the same day…

Starsky the amazing juggling otter was a real holiday highlight for us all. We took some video footage and put it on our website in case you’d like to see him in action!

Finally it was time for ice creams all round to celebrate another fantastic holiday in Cornwall! 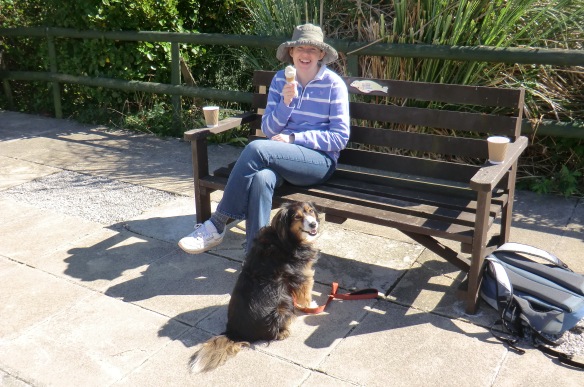 Follow Dog Friendly Days Out and Holidays on WordPress.com